The Georgia Hope Scholarship faces funding problems which are causing cuts to the scholarship program and redefinition of eligibility requirements for the Hope Scholarship.  It is interesting to review what the state of Georgia Department of Audits writes about the current state of the program.

(This Post takes data from and information from the Georgia Lottery Website describing “where the money goes“.

The following paragraph comes from the Georgia Department of Audits and Accounts Financial Report dated January, 19, 2011.) 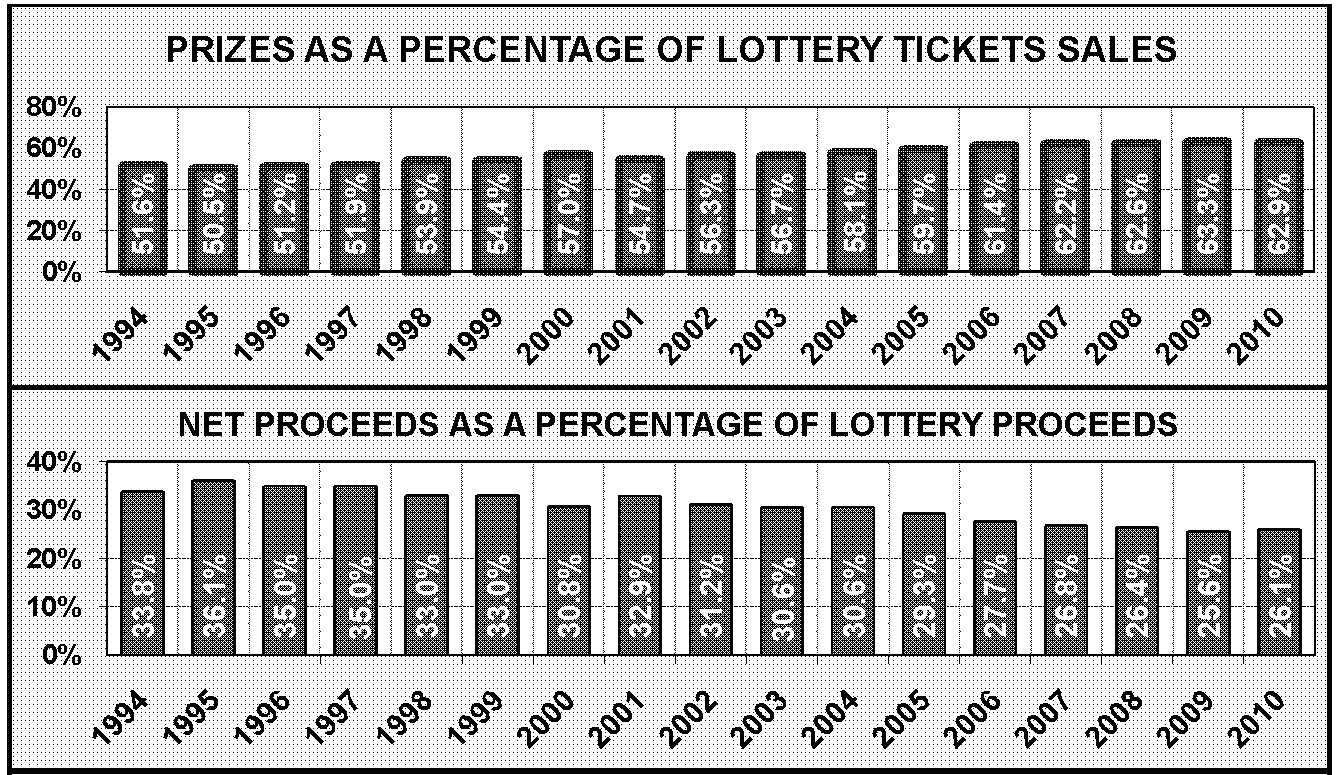 ( The following writing is taken from the Georgia Department of Audits and Accounts Performance Reports dated March, 2011.)

We found that the language in the Lottery for Education Act is somewhat ambiguous regarding the amount of lottery proceeds that is expected to be transferred to the state. The Act provides that the GLC should “as nearly as practical” remit “at least 35%” of lottery proceeds to the state annually and also requires that the Lottery be operated in a manner that “maximizes revenues.” GLC has not remitted at least 35% of lottery proceeds since fiscal year 1997. GLC’s Board has directed GLC to pursue the goal of maximizing revenue for education.
If the General Assembly wishes to establish more direct control over the Lottery, clarifying the law by removing ambiguous language and conflicting goals would be necessary. However, if the General Assembly establishes a firm requirement regarding the minimum percentage of sales to be remitted to the State, it should ensure that the requirement level that it sets does not limit GLC’s ability to develop new products and to react to changing market conditions. If GLC was required to start remitting 35% of its sales to the state, it would have to abandon its current marketing strategy and it would almost certainly result in significant reductions in sales and proceeds. Achieving a 35% return to the state would require that prize payouts for instant games be reduced, which would most likely result in a (potentially significant) reduction in sales volume, and the net effect would be that the state would receive 35% of a much smaller amount of lottery sales.
In addition to commissions paid to sales staff, GLC has employee bonus (or incentive payment) plans for its executive staff and for its non-commissioned staff. In fiscal year 2010, GLC awarded approximately $532,000 in incentive payments to its executive staff and approximately $1.36 million to its non-commissioned employees (total incentive payments were O.O56% of GLC’s net sales). GLC’s incentive payments to executive staff ranged from $25,460 to $143,277 and its incentive payments to non-commissioned employees ranged from $1,321 to $23,184. We found that few other state lottery programs offer incentive payment plans to its executive and non-commissioned employees. A survey published in 2009 found that six of 43 state lotteries had incentive plans for their chief executives. Our survey of 10 states found two states had incentive plans for their executive staff and two states had incentive plans for their non-commissioned employees. In addition, the number of eligible employees and the amount of incentive awards was less in those states than is offered by GLC.
Finally, we found that while Georgia’s Lottery is generally considered to be high performing, most state lotteries created after GLC was established have not emulated many of GLC’s more innovative attributes. Of seven state lotteries created after 1993, one had a prize payout percentage near Georgia’s, one had a public corporation organization structure, and one awarded incentive pay to its executive level and non-commissioned employees.
In its response to the report, GLC indicated that performance measures are the best indicator of any business model and the audit accurately describes the GLC’s high performance. GLC noted that it was established as a public benefit corporation and given the flexibility to operate as an entrepreneurial enterprise to allow it to effectively respond to an ever-changing marketplace. In addition, GLC expressed concern about the ability to compare lotteries, indicating that each U.S. lottery has been established and operates under unique circumstances. Additional comments provided by GLC have been incorporated throughout the report.

The Georgia Legislature should clarify the role of the Georgia Lottery with respect to percentage of net proceeds returned to the scholarship program.  Based on the financial and performance report from the Georgia Department of Audits and Accounts, the Georgia Lottery provides some of the best salaries and bonuses to its executives.   This, along with marketing dollars, could be reduced to help achieve a higher net percentage of lottery proceeds paid to the scholarship program.  Obviously, it is doable based on the results achieved in the years 1995-1997.  The Hope Scholarship is facing a funding problem.  All areas must reviewed for efficiency and evaluated based on the original goals and objectives of the program.  These reports from the GA Dept of Audits and Accounts shed light on some areas to review and evaluate.